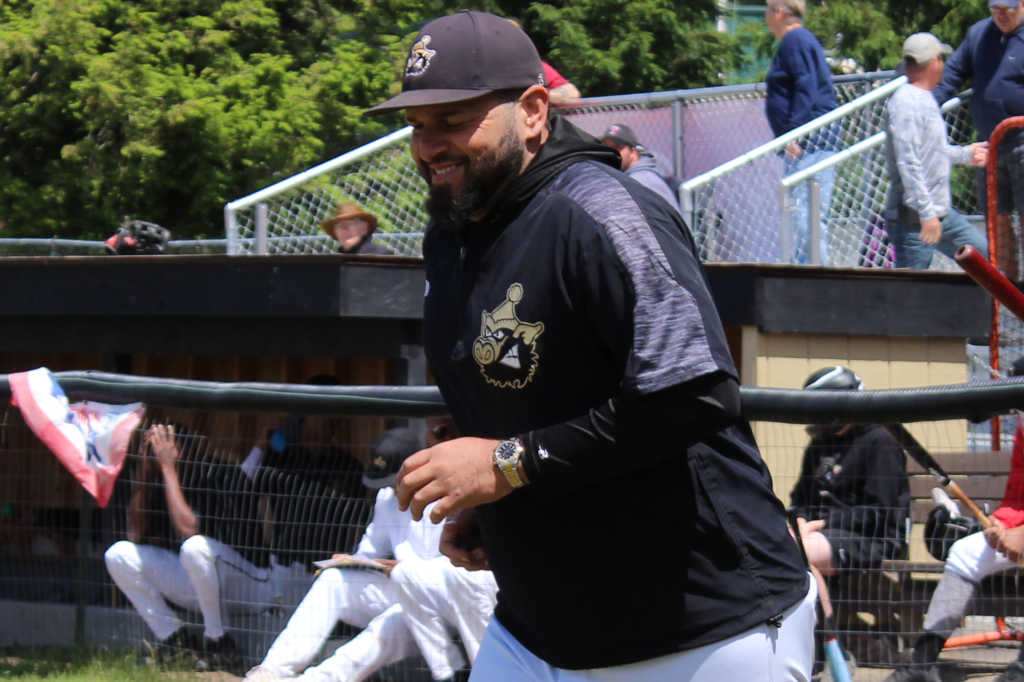 TUPPER LAKE, NY  –  The Saranac Lake Surge came into the series versus the Tupper lake Riverpigs ready to play. In game one, the Surge offense exploded in the third innings, putting up five runs and the pitching was able to hold off the Riverpig offense just enough to squeak by with the 7-6 victory.

Mark Berryman got the start for the Surge and did not have his best stuff. But he was still able to end his outing in line for the win, which he would earn after the games conclusion. Berryman threw seven innings, allowing five runs on nine hits and three walks, while racking up five strikeouts. Steven Adamson relieved Berryman and allowed one run making the score 7-6, but Jordan Rhodes and Ryan Evans were able to complete 1.1 scoreless innings to close out the game.

Jared Dingus started for the Riverpigs, going six innings, allowing six runs on seven hits and two walks while striking out eight batters. He was relieved by Zach Goree who threw three innings in relief, allowing one run, which would be the difference in the game, on one hit and five walks. He struck out five in his appearance.

For the Surge, Yordi Francisco, Javon Martin and Douglas Carter Jr. all had two RBIs apiece, powering the Saranac offense to victory. For the Riverpigs, Bobby Garbuio went deep in a 2-3 effort with one run scored and three RBIs. Chandler Kazele had a home run of his own, as well as two runs scored and two RBIs in the loss.

Game two started the same way as game one, with the Surge taking a large lead in the third inning, before the Riverpigs would eventually come back making it a close game. But once again, the Surge came out on top scoring the winning run in the top of the ninth inning. Cairo Selden started for Saranac, allowing seven runs, only four earned, in 5.2 innings pitched with three hits, six walks and eight strikeouts. He was relieved by Jordan Rhodes who threw two scoreless innings, walking two and striking out two. He would be awarded the win. Max Peterson would make his first Empire Baseball League appearance, throwing 1.1 scoreless innings to close out the game.

Jose Mieses had a rough start for the Riverpigs, allowing seven runs in 4.1 innings pitched. He allowed five hits and six walks while only striking out two batters in his outing. The three relievers who entered for him, Hector Martinez, Johsson Arias and Randy Alcantara combined for 4.2 innings of one run ball as Alcantara allowed the winning run to score in the ninth inning.

Carter Jr. had another two RBI game for the Surge. Dominiq Moore and Zack Fowler also helped  power the Saranac offense with two RBIs of their own. Mikey Edie was the offensive powerhouse for Tupper Lake, going 2-4 with a double, a run scored and four RBIs.

The Riverpigs completely flipped the script in the final game of the series. They scored two runs in the first inning, piling on 13 runs, en route to a mercy rule seven inning victory in the series finale. Shawn McFeggan started for the Surge, allowing seven runs in five innings on nine hits and six walks. Johampher Arrendol entered in relief and had a rough outing in his one inning of work, allowing six runs on two hits and four walks.

Dimitri Nunez had a stellar outing in his EBL debut throwing a complete game shutout, allowing five hits and one walk while striking out seven batters.