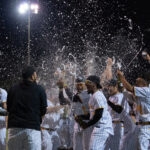 TUPPER LAKE, NY  –  The series everyone has been waiting for has finally arrived. After the Plattsburgh Thunderbirds beat the Saranac Lake Surge in the Wild Card game, the Thunderbirds moved onto the Empire Baseball League finals to face the Tupper Lake Riverpigs.

Game one saw fans packed to the brim at Municipal Park in Tupper Lake as the Riverpigs Jordan Warecke faced off against Rancys Nunez. Warecke had a solid start for the Riverpigs, going seven strong innings, allowing three runs on nine hits and one walk while striking out five batters. He was relieved by Zach Goree who struggled to get outs, going only 0.2 innings allowing two runs on one hit and two walks. Randy Alcantara entered the game for Goree and gave Tupper Lake a scoreless 1.1 innings in relief to solidify the Riverpigs 7-5 game one win.

For the Thunderbirds, Brandon Russo went 1-3 in the game with a double, one run scored and two RBIs. For the Riverpigs, Malik Blaise was on offensive force, going 2-5 with four RBIs. Mikey Edie also had himself two RBIs, going 2-4 with a triple.

Game two was the complete opposite of game one, being a lopsided affair in favor of the Thunderbirds. The Plattsburgh offense put up an offensive barrage against Tupper Lake pitching scoring 15 runs in the 15-2 win. Katsuya Arai and Derrick Pyles each had three RBIs while Hanley Acevedo tacked on two of his own. Plattsburgh was also led by starting pitcher Kyung Min Han, who went six innings, allowing two runs on six hits and six walks, while striking out eight. He was relieved by Hunter Davis who closed out the game with a scoreless inning of his own.

For the Riverpigs, Mikey Edie and Hector Martinez had an RBI each for the quiet Riverpigs offense. Dimitri Nunez got the start and struggled, only going one inning allowing three runs on three hits and two walks. The Tupper Lake relievers did not do much better allowing nine runs in five innings of work.

Game three was a back and forth affair with neither team being able to pull away. Plattsburgh started the game putting up five quick first inning runs, but the Riverpigs answered with three of their own. This trend would continue up until the ninth inning when Riverpigs designated hitter Sean Guida ripped an RBI infield single to walk-off the 11-10 game and lead Tupper Lake to a 2-1 series lead and one win from the title.

Walner Espinal had five RBIs in the game and Mikey Edie and Hector Martinez had two RBIs each for the Riverpigs. For Plattsburgh, Marcos Estevez had two RBIs, while Olivber Moreno, Derrick Pyles, Brandon Russo, Jake Sisto and Hanley Acevedo had one RBI apiece.

Hiroto Yasuda had a rough outing for Plattsburgh, allowing 10 runs in 5.2 innings pitched. Emmanuel Brantley entered in relief and was rock solid until the ninth when he allowed the game winning run.

Jared Dingus started game three for the Riverpigs, allowing five runs in 3.1 innings before being relieved by Jose Mieses who allowed four runs in four innings of work. He was relieved by Randy Alcantara who shut the door for Tupper Lake securing the victory.

With the series on the line, the Plattsburgh Thunderbirds came to play. Although they went down early in the first inning as the Riverpigs scored two, they cut the lead in half in the bottom of the first then rode a three run fifth inning to take a 4-2 lead.

Thunderbirds starter Hunter Davis twirled a much needed strong start going six innings, allowing two runs on seven hits and four walks while striking out two batters. Davis had his curveball working, keeping the Riverpigs lineup off balance throughout his outing. He was relieved by Andrew Kramer who was able to hold the two run lead into the ninth inning before being replaced by Andrew Bielicky.

In the ninth, the Riverpigs were able to rally to tie the game at four, and gave the team a chance to send the game to extra innings on a single to centerfield by Bramdon Perez that was misplayed by centerfielder Hanley Acevedo.

The Riverpigs would lose the game on a walk-off walk at the hands of Olivber Moreno. Randy Alcantara came in for the Riverpigs to try and send the game to extras, but to no avail.

Olivber Moreno was the Thunderbirds main offensive force, going 1-3 with a run scored, two RBIs and the walk-off walk. For the Riverpigs, Bramdon Perez went 2-4 with two RBIs and a stolen base.

It all came down to a decisive game 5 situation. Both teams threw their aces out on the mound, Jordan Warecke for the Riverpigs and Keyvan Grenald for the Thunderbirds. The pitchers duel was as advertised as both starters had strong starts, Warecke going 5.2 innings allowing two earned runs, and Grenald allowed four runs in 6.2 innings. Grenald’s one mistake in his start was an early three-run home run by Hector Martinez.

Although Warecke had a strong start, Plattsburgh was able to come back to tie the game at four. But not all hope was lost, as in the bottom of the eighth inning with two outs, Sean Guida stepped up to the plate and delivered the game winning run on a sacrifice fly off Hiroto Yasuda, cementing the series with a 5-4 victory.

Jose Mieses entered the game in the late innings for the Riverpigs and shut the door, earning the victory. Sean Guida earned the title of Finals MVP hitting a walk-off single in game three and scoring the game winning run to seal the finals victory.

That wraps up the 2022 Empire Baseball League season! Congratulations to the Riverpigs on their first ever EBL title. Thank you fans for your support!